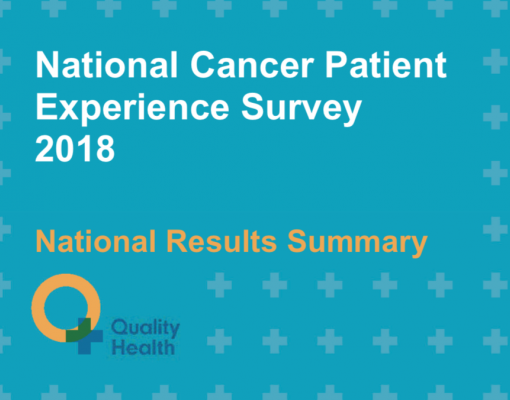 The 2018 National Cancer Patient Experience Survey was released last week. The annual survey was targeted at NHS patients with a confirmed primary diagnosis of cancer who were discharged after an inpatient episode or day case attendance for cancer-related treatment in the months of April, May and June 2018.

As in previous years, the survey shows that generally, patients are very satisfied with the standard of care they receive with respondents giving an average rating of 8.80 with 94% of patients giving a rating of 7 or higher; a statistically significant increase on last year’s score.

79% of respondents said that they were definitely involved as much as they wanted to be in decisions about their care – a statistically significant increase from last year. In addition, access to financial help and to support groups showed statistical improvement.

91% of respondents said they were given the name of a Clinical Nurse Specialist who would support them through their treatment – a statistically significant increase from last year. The majority of respondents said that it had been “quite easy” or “very easy” to contact their CNS, but the score of 85.5% in 2018 who expressed this is significantly lower than the 86.2% score in 2017. We can thus confer that in 2018 more patients were aware of their clinical nurse specialist but found it slightly less easy to contact them.

Areas that showed statistical deterioration are waiting times for a patients first appointment with a hospital doctor, time waiting for diagnostic tests, and support from doctors and nurses within the GP surgery. Patients also felt less confident that their hospital doctor had access to the right documents, such as medical notes, x-rays and test results.

There were some variations in the experience of patients by demographic group, with men being more satisfied then women, people who report themselves as ‘white’ had a better experience than those who report themselves a being of other ethnic groups. Generally speaking, patients under 45 years old reported a poorer patient experience than those older than 45 years. Heterosexual patients were more likely to report that were treated with respect and dignity while in hospital than those with other sexual orientations.

The National Cancer Patient Experience Survey reports on the experience of patients by Trust, CCG and by Cancer Alliance and these can be accessed here.

Patient comments on the care have been sent to each Trust’s survey leads and generally give a more personal insight into the experience of patients.

In summary, this latest report remains a positive indictment of the experience of patients treated for cancer, however there are signs that it may be more challenging to maintain this performance in the future. There also remain clear differences in the experience of patients who are female, non-white and who are not heterosexual. This represents a clear challenge to cancer services across the UK.